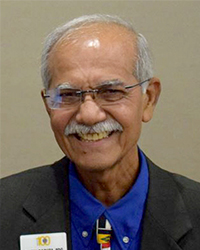 Lion Austin has four brothers, Lions – Norbert, Stany, Melville and Felix, and three sisters, Lions – Leonilla, Dorothy & Queenie who are also charter members of the Broadview Kala Sampath Lions Club. He spread Lionism in his entire family and they have a total of 18 lions in his family. Austin tied knots with Terry Pinto, from Bombay, originally Mangalorean, on October 25, 1980.

Austin has been an outstanding leader throughout his 43 years of Lionism. Lion Austin is a hard-working Lion, dedicated to service in Lionism. He has served at the Club, District, State and International levels doing an outstanding job at all levels. The Forest Kala Sampath Lions Club bestowed upon him a Life Membership from The International Association of Lions Clubs in July 2005 for his dedication and hard work for Lionism.

Austin’s commitment to the principles of Lionism and to the service of those less fortunate makes him a great leader in MD1. As a Sector Coordinator for Sight First II Campaign who stood third in sector wise total collections in the United States. Currently he is a Multiple District 1 Alert Chairman and Lions of Illinois State e-Magazine Editor who took this magazine to a higher level of appreciation from Lions of Illinois. He was the Official Photographer for USA-Canada Lions Leadership Forum 2016 and 2017 where more than 2,000 Lions from USA and Canada were in attendance. He has selected again for 2018 Forum in Milwaukee. Twice as a Governor and Vice Council Chairman, he showed his leadership skills in making special programs like Lions Open University, VisionFirst and Tsunami Relief Fund and made them great successful programs this. He is a visionary and a missionary to dedicate his service to Lionism.

He has been a resident of Forest Park since 1981 and has been married to his wife Lion Terry for thirty-seven years. Together they have four children, Anita-Sr. Project Manager, Abbott Laboratories; Anil-Vice President of Goldman Sachs; Atina-Accounts Executive, Procter & Gamble; and Angel- Team Leader, Google who are all Lions. Lion Austin was employed at Deltrol Corporation as a Ddepartment Manager who earned Green Belt training from University of Illinois, Naperville Campus in Six Sigma Lean Manufacturing. Now he is retired since August 12, 2016. Lion Austin is a writer, actor, public speaker, publisher and a true leader with multi skills, knowledge and experience.

Austin has volunteered in his home community of Forest Park for the past thirty-three years. He was the member of St. Bernadine Parish Council & School Board, Forest Park Neighborhood Watch, Friends of the Library, Forest Park Chamber of Commerce, Main Street and Forest Park Citizens Police Academy. He came first in his age category 65-69 twice this and last year in 5K Run for Breast Cancer in Stickney.

Lion Austin received Award from the President of India in December 2009 in Mangalore for promoting Konkani culture and literary contributions through his books and articles in the US; He received ‘Millennium Leadership Award’ from Federation of Indian Associations in 2000 and a Leadership Award by Bishop of Mangalore-India, also in 2000. He was named as Asian American Hall of Fame in 2003 for Community Service. Received special award for his literary contributions in 2004 in Dubai and Chicago Mayor’s Award in 2005 for organizing ‘VisionFirst’ for Chicago Public School children. Lion Austin’s family received Asian American Humanitarian Family of the Year 2005 Award from Asia TV Chronicle. He is also a Certified Public Service TV Program Producer by Comcast Public Television. Lion Austin & Terry received Distinguished Couple Award from Chicago Filipino American Lions Club. Lion Terry and Austin were named as “Lifetime Asian Humanitarian Couple 2013” by Asian Chronicle, USA and in 2015 Lion Austin & Terry were named as “Humanitarian Couple” by Congressman Danny K. Davis, on behalf of Congressional District 8.

Lion Austin Joined the Padil-Mangalore Lions Club in 1979 in India and has been a member in good standing ever since. He has held all the offices in his clubs including the Presidency in 1992-1993 (Chicago Damayan Lions Club), Charter President, 1996-1998 Broadview Kala Sampath Lions Club). He has served on all the club committees and chaired most, including Candy Day, the July 4th Parade, Chicago Christmas Parade and the St. Patrick’s Day Parade.

He was the governor of District 1-A and Vice Council Chairman of MD1 twice, for 2004-2005 and 2012-2013. He initiated 5 New Clubs in 2004 -2005 and one new club in 2012-2013, He started District 1A signature programs like Lions Open University in Chicago, VisionFirst Program in District 1A with the help of Lion Ron Johnson from Beverley Ridge (Committee Donated $25,000 and provided more than 80,000 pairs eyeglasses to needy students in Chicago with the help of Lens Crafters Luxotica) and for Tsunami Relief Fund (Collected $48,000) in District 1-A with great success.

Lion Austin received numerous awards including 3 Intl. Presidents Medals from Lions Clubs International, 3 International President’s Leadership Medals, 16 International Presidents Appreciation Certificates, Millennium Leadership Award from the Federation of Indian Associations in Midwest, Award from the President of India, 6th Progressive Lions of Illinois Fellow, three time Lion of the Year club awards, District Lion of the Year Award, District 1A Citizen of the Year Award, Life Time Community Volunteer Service Award from President George W. Bush, He recognized with Lions Clubs International Foundation’s 81st Level Progressive Melvin Jones Fellow, etc., etc., to name a few. His leadership is recognized all over the world and recently he has been named as the “International Konkani Icon” at the program held at the Milagres College, Kallianpur by Valley Quadras where prominent Konkani writers were gathered.

Lion Austin working hard in Forest Park community as a member of St. Bernardine’s Parish, member of Forest Park Chamber Commerce, member of Citizens’ Police Academy, member Neighborhood Watch, Commissioner of Forest Park Diversity Commission and its secretary, as a member of The Forest Kala Sampath Lions Club, kept Des Plaines Avenue from Jackson to Harrison clean by removing trash from both sides of the road and the village named this street as The Forest Lions Way. Because Lion Austin’s humanitarian activities to help the needy in Forest Park to make this place a better place to live for tomorrow, the Mayor of Forest Park named Des Plaines Avenue from Harrison to York as ‘Honorary Dr. Austin Prabhu Way’ in the month of May, 2018 by honoring Austin for his humanitarian work to less fortunate.

He started editing and publishing Veez Konkani Illustrated Weekly e-Magazine which has worldwide readers in many countries where Mangaloreans live. Currently he is on publishing it’s 100th issue. This e-Magazine has a minimum of 46 to 101 pages per every week.

Austin has been editing and publishing 3 e-Magazines: Veez Konkani Weekly in 4 Scripts, Illinois Lion & Leo State Magazine for State of Illinois and Governor’s Newsletter for District 1A Lions Governor without fail, no matter where he is.

He is one of the members of US President Donald Trump’s Advisory Board and US President’s Life Member, Order of Merit.

Honored at the Gulf Voice of Mangalore-6 in Kuwait with a title: “Konkan Karavallicho Veer” on November 9, 2018.

Honored by Mangalorean Konkani Association, New Jersey during their 10th Anniversary Celebrations in 2019

Was the chief guest at several programs in Gulf, India and in the US. 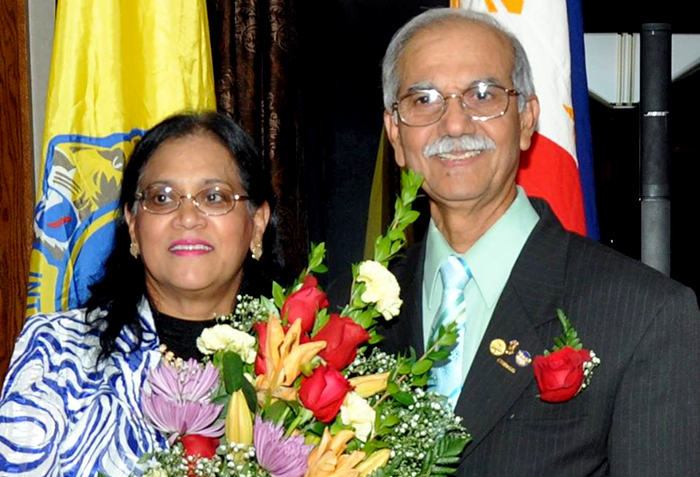